Every day matters to families in Ohio affected by gun violence …

[my remarks presented to Faith in Public Life’s Moral Movement rally on October 15, 2014 in Columbus, OH.  For a more detailed description of the legislation I mention, use this link. ]

Thank you for the invitation to be part of today’s Moral Movement. We’ve traveled from Cleveland to be here representing God Before Guns, a multi-faith coalition to reduce gun violence. It’s not our first time here in Columbus, and I’m quite sure it will not be our last. The issue of ending gun violence is too important to ignore. We have cried out No More Silence and No More Names and Not One More and still we know that before the sun has set on this day that 86 people in our country will be shot and killed. Ohio is responsible for more than its share of that number, as 3 of the 86 will be shot dead in our state. Every day matters to the families of Ohio affected by gun violence.

I’m a pastor serving a congregation in Cleveland Heights, OH. When the shootings happened at Chardon High School on February 27, 2012, I spent the late afternoon with the youth of my church, including families who were there in the high school cafeteria at the time of the shooting. We cried together and talked about the horror of the day, and my eyes were opened to the reality that every child sitting  in the church’s youthroom had been on school lockdown sometime in the last year. They not only knew the drill, they have sheltered in place for real.

Just months later, I was preaching just two days after the Sandy Hook shootings in which 20 children were gunned down in less than 5 minutes. I couldn’t ignore the tragedy. Do you know the children’s book Alexander and the Terrible, Horrible, No Good, Very Bad Day?  It’s the story of a day in the life of Alexander when from the moment he wakes up things do not go his way. He trips on a skateboard. He drops his sweater into the sink while the water was running. He doesn’t get the window seat in the carpool. His teacher criticizes him for singing too loud, and there’s no dessert packed in his lunch.

That should be the stuff of a child’s life. I was preaching while other pastors were delivering eulogies for 6 year olds. How do you write one, and then how do you write 19 more? My life changed that day and no longer could I stand idly by.
Now immersed in this work with God Before Guns, I shudder as I see how guns are held as sacred. I hear The 2nd Amendment defended as being more important than the Ten Commandments, or for me as a Christian, superseding the Great Commandment to love God and my neighbor as myself. I am angry that the Ohio Legislature reinforces this. In so many ways.
There was the spring Saturday morning when I stood with parents of young children in a 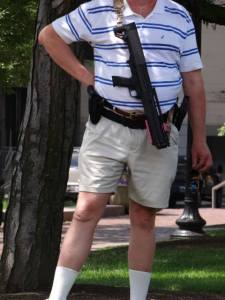 small city park in Oberlin when armed men from other parts of Ohio took over the park claiming that Ohio’s laws of pre-emption allowed them to be there, no matter what the townspeople of Oberlin wanted for their families. I was part of a conversation this morning in Mayor Jackson’s office in Cleveland where laws are being considered to keep Clevelanders safer from the gun violence that is plaguing our city – city ordinances that will be argued and fought because of pre-emption. How did these laws come to be that allow the open carrying of guns against the safety a local community wants for its citizenry? 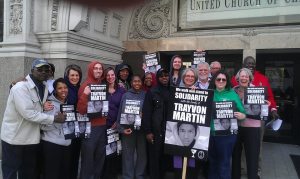 I have walked the downtown streets in a hoodie in solidarity with Trayvon Martin’s parents knowing that the Ohio Legislature will consider again this fall a Stand Your Ground law that will make it easier to justify shooting to kill. I have testified against HB231 which would grant access for guns to be taken into churches, airports, day care centers, places that previously were exempt from allowing guns. Now as the fall classes are back in session, I pray for those schools that are arming teachers, knowing that Ohio law has allowed this to happen.
Children have a right to grow up here in Ohio – the state that Slate Magazine refers to as America’s Capital of Accidental Child Shootings. I don’t like the word accidental because for a child to have access to a loaded gun, it must pass through the hands of an adult first. Ohio has no law on the books for Child Access Prevention, though more than half of states do. That needs to change. God Before Guns will be working to form alliances and building

a statewide coalition this year to make CAP a priority.
God, strengthen our resolve, bring power to our voices, and grant us the courage to use them. In your great mercy God, hear our prayer.