Home Rule in Ohio? We’ve got our work cut out for us!

What follows are my brief remarks from yesterday’s press conference at the State House when PG Sittenfeld, candidate for US Senate, announced a new initiative for a Constitutional Amendment to restore home rule for gun laws. Or you can watch This video of Toby Hoover’s and my remarks.

You can read more about the Amendment at a variety of news sources.  Here’s one link.

January 28, 2016
Good morning. My name is Rev. Kristine Eggert and I’m here to support this effort for a Constitutional Amendment to restore home-rule for gun related laws. I am the co-founder of a Northeast Ohio based organization, God Before Guns. But I’m here today as a mother. Grandmother. Pastor. Ordained clergyperson in a denomination that has made Gun Violence Prevention a priority in its churches.

I began my involvement on Monday, Feb. 27, 2012. The day of the Chardon High School shootings. I had to — for the Chardon families who were members of my church. For the youth I pastored – students in Cleveland, Euclid, Shaker Heights, Cleveland Heights schools – all of whom have experienced lock-down in their schools because of guns. Children all over northeast Ohio not only know the drill, they know a threat is real. The killing of 20 first-graders at Sandy Hook came soon after, and my activism deepened. I will continue this work until it is no longer the case in our country that 90 people will die by a gun. Every single day. I will do this work until 8 children no longer die every day. I am a faith leader and a Cleveland resident who still grieves the senseless killings of Ramon Burnett, Major Howard, and Avielle Wakefield. A 5 year old, 3 year old, and a 5 month old baby – all shot dead in the crossfire in their Cleveland neighborhood.

I supported Mayor Frank Jackson by giving testimony in favor of stricter gun ordinances. I applaud Cleveland’s City Council for approving these new laws last year that do not violate the rights of lawful gun owners, but promote responsible gun ownership. They passed these laws knowing that a lawsuit by gun rights advocates would soon follow. Of course Cleveland is no stranger to state pre-emption, as its assault weapons ban was struck down by the Ohio Supreme Court in 2010.

I’m here also for smaller communities in northeast Ohio like Oberlin. A city that has been sued for having a law that bans guns in its parks. I was there the day that out of town gun rights advocates arrived to take over the small park playground that sits in the middle of town. They openly carried their weapons in defiance of the wishes of Oberlin. I watched as family after family left the park, frightened to push their children on the swings next to a man with a gun.

I believe Oberlin should be able to decide for itself that parks are off limits for guns. And the same for Cleveland. Oberlin and Cleveland are very different communities. Their common ground is that local voters should decide what is best. That’s why I am part of this effort to amend Ohio’s constitution to bring gun laws back home where they belong. I believe we will find the public’s blessing in gathering the necessary signatures, and I’m eager to get started. 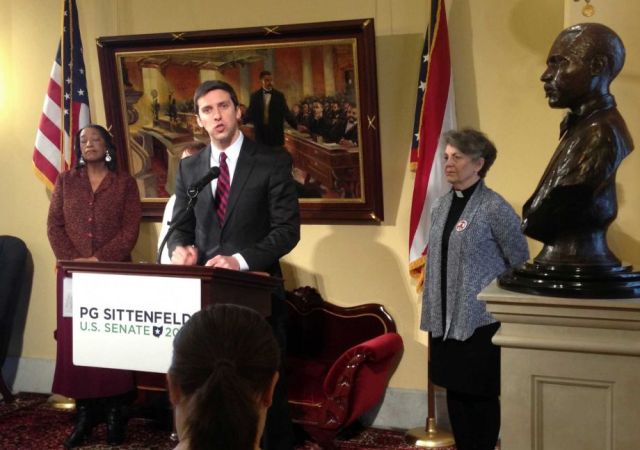