Are you envious because I am generous …

[excerpts from a sermon preached on Sunday, September 21 at Disciples Christian Church in Cleveland Heights, OH]

I missed being with all of you last Sunday … well, sort of. It was my birthday but that wouldn’t normally have taken me away. I’ve had a lot of birthdays and I’ve probably worked on most of them. But last year began a whole new phase of celebrating when our first grandson was born on my birthday. This year, as little Walt was turning 1 year old, his parents had an out-of-state wedding to go to, David and I were asked if we could come and stay for the whole weekend. Since we’re the only grandparents who must rely on Skype waves at a computer screen instead of grabbing a hug anytime we want to stop by, this was the stuff of which grandparents dreams are made. An entire weekend when the only stresses were would the little guy sleep all night? Would he stick to the schedule his parents so very carefully wrote out for us? Would he be glad to see us in the morning, when we were still there on the 4th morning?
But those stresses very quickly melted into what were 4 days and nights of unparalleled joy. Joy from such seemingly inconsequential moments that they seem almost too small to put into words. Smiles and giggles. Taking a step or two until falling on his bottom. Watching his little hands smashing a piece of banana, whether it was to feed it to himself or to the dog who waits patiently right next to the highchair. His small little redhead resting on my shoulder when he would get sleepy, and a big smile waiting for me when he woke up. We were only 5 hours away from real life, and yet it seemed like we were in an alternate universe. 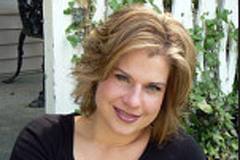 That’s where I was while you were here listening to Rev. Amy Gopp preach. And can that woman preach!  But for as skilled as she is, what makes her sermons come alive is that she has lived the gospel. She’s lived it from her hometown of Kent and in her growing up years at Camp Christian, Croatia and Bosnia, Sarajevo and Manhattan, and too many others to mention. I listened to her sermon on Tuesday when I got back, and she described the world that she has seen from her personal experience and professional position that we only wish was the alternate universe, instead of the real world.  She told us of the man whose home was on the steps of the church she served in Manhattan, and a church that needed a vote to decide if that was OK or not. She told us of women who must sell their bodies in order to feed themselves and their families. She told us of migrant workers picking tomatoes, unable to make anything close to a living wage, while we enjoy the fruits of their labor at the neighborhood Taco Bell.

After hearing all that, I was tempted to get in my car and drive back to where life seemed ideal.  But that not being an option, I did what I do every week — I dug into the text for the next sermon. Jesus is teaching us by parable this week. You know about parables? Those stories where the leading roles are played by people just like us, where circumstances happen just like they do in our own lives. Parables are always about how the world ought 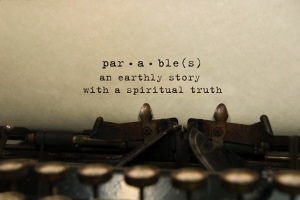 to be and how people ought to behave in order for God’s desire for how the world is supposed to be. They end with a moral imperative, of course, but before that, there’s always an unexpected twist that turns what we think we know upside down. A twist that makes us realize how wide is the chasm between how things are and how they would need to be for God’s vision for the world to be the reality.

Parables describe God’s kingdom here and now that we’re supposed to be at work building. Building, not trying to escape the parts we don’t like as I did last weekend. And not by accepting the injustices as Amy described last week. But by living in it according to what Jesus taught. That’s what parables are about. What parables are not is making us feel good about everything or to tell us that our work here is done.

Because, boy oh boy, when we read today’s story of the Vineyard workers, do we see that there is work to be done! This story hits us all.  Anyone with a strong work ethic. Anyone who has shown up every day on time to punch the clock and stayed until the work was done. Anyone who must travel far to where the jobs are.  For union guys.  Feminists who demand equal pay for equal work.  For any manager who answers to a boss whose eyes are on the bottom line. Shareholders who vote. Bankers who loan. Investors whose job it is to maximize portfolios.  To anyone of the above, this story just doesn’t make sense. There’s no metric by which we measure success that makes this good business practice. To pay people the same amount for fewer hours of work.

And if we’re brutally honest here, especially to pay people the same for fewer hours of work when they are those people. Those people who show up late or unprepared. Unskilled, uneducated, maybe even undocumented. Those people who don’t want to work. We might say under our breath: They’ll take whatever they can, as long as someone’s willing to give it to them. That’s how we picture day laborers or those who stand on street corners, isn’t it? We live in a world of those givers and takers, to listen to our politicians.

This story does not bring out the best in us.

In a parable, God is always one of the players. And so by now we’ve figured out that it is the landowner this time who is God. Because no one else would describe such a workplace. No one believes in the worth of every person. Even in those who aren’t chosen first or chosen at all. There is humiliation in not being chosen. I can still remember back to 5th grade, not being chosen for a kickball team. No one who wanted to win would have chosen me first or until there were no better choices available. But this isn’t fifth grade; this is serious as anyone who is without a job in today’s tight job market will tell you. Whether you’re too old or the wrong color or gender or someone would work cheaper, or whatever else can be decided by an unfair whim. Judgments that we make about who is left standing and unchosen at 5:00 in the afternoon are most often mistaken and unfounded. This landowner who we’ve now figured out is God believes in those left standing at 5:00 so much so that God gives to them all that God has promised to us, and we don’t know what 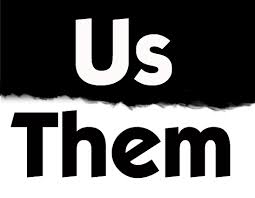 to do with that. Mostly we don’t like it because …

You’re making them equal to us.
And God says, Yes. Exactly. High five. Fist bump. Now you see what I mean. You get it. Now we can get started on building that world. Won’t take long now that we’re all on the same page.

And we answer:  Hold on, God, wait just a minute. We’re not there yet. Not sure we have the same measure of generosity that you do, God. At least not until we’re sure that we have enough of what we need, be it wages or respect or fairness or assurance of our own security or to cash in on the privileges we’ve work so hard for.

To which God replies:  are you envious because I’m generous?

Don’t you hate it when God cuts through all our words and comes quickly to the point? Don’t you dislike it when God so efficiently separates out what it is we think we need and instead gives us what is enough? Isn’t it maddening when God so pointedly puts us in our place, when it’s not at all the place we think we’ve earned, separating us from them. Doesn’t it frustrate and confuse us when we hear these stories that remind us that God will always choose the side of the weak, when we live in a world in which the strong can crush the weak, and we have to survive somehow.
We are envious, to be sure. But we are also in need of convincing that we too are worthy of God’s generosity. For many of us, that will take our entire lifetimes. It’s why we worry that we won’t have enough. It’s at the root of our fears, that we won’t be kept safe, included, forgiven, and loved. We’re not convinced that God has our back while also making the way safe for us to travel. Maybe we don’t really believe that it’s also there for us. But as the poem on the front of your bulletins will remind you this week, the sun shines on every face and each day ends with grace.

We are made in God’s image, and today’s image is one of generosity. It’s in our DNA, and if as followers of Jesus, we could claim that and own it, there wouldn’t be such a wide chasm between the world these parables describe and the world in which we live.

In that world, a shepherd could leave behind 99 sheep to go after just 1 that lost his way and not lose his job. That woman could take the time to turn her house upside down for just one small coin, and we wouldn’t think it a waste of valuable time. That father whose adult son has utterly disgraced him could not only welcome him home but would break into a run in order to throw his arms around him, when no dignified man of his day would run unless chased. Instead of a world in which we spend time debating what constitutes abuse in father-son relationships, not for adult sons who have squandered fortunes, but for 4 year olds riding in the back seat of a car.

We spend far too much of our energy hoping and even claiming that God is on our side. When, as Abraham Lincoln once said, our greatest concern needs to be that we are on God’s side. And on God’s side, generosity isn’t something to be understood or accounted for, calculated, quantified, or begrudged of the one who receives it.

Because that someone is you. And that man sleeping on the steps of Park Avenue Christian Church. That someone is me and my grandson safe and snuggled. And that someone is a child racing to cross our border to escape the horrors of her homeland.
Who needs to be first in line when we will all receive a full measure of God’s generosity?