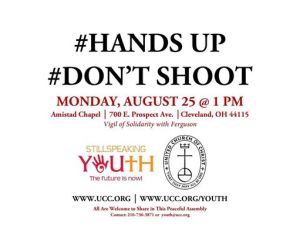 Yesterday I participated in a Vigil of Solidarity with Ferguson, MO at the United Church of Christ Headquarters in downtown Cleveland.  Late on Sunday afternoon, the flyer was posted on Facebook saying:  All are welcome to share in this peaceful assembly.  So, together with 4 others from the Disciples of Christ church that I serve, we went.  We began with prayer, proclamation, and song inside in Amistad Chapel.  The Chapel appropriately enough was dedicated in 2000 in honor and memory of memory of the African captives who revolted aboard the ship Amistad in 1839. The last time I was there it was to begin a silent walk through downtown streets in solidarity with Trayvon Martin’s family, and we were dressed in hoodies.

We followed the lead of the Rev. Dr. Courtney Clayton-Jenkins to stand outside on this 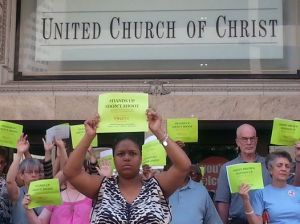 day.  Rev. Jenkins called out from the Psalms:  Rise up O Lord: God, lift up your hand.  And we answered:  Hands Up.  Don’t Shoot.  Again and again, over and over with our hands raised until our arms tired from the position.  We read in call and response words like:  we pray for the families of children who have been slain by gun violence, left to die on streets with less dignity than is given to animals.  Then we were silent.  It seemed a long while.  Hands raised.  I alternated between keeping my eyes closed in prayer and having them fully open staring straight ahead.  I was holding my hands up symbolically.  I wondered what it must be like to be in that position with your life on the line.  My tears flowed.  To be honest, I can wonder all I want, but most likely I will not know because …

I began this work to end gun violence on Sunday, December 16, 2012.  It was just two days after the Sandy Hook shootings.  I preached a very different sermon than the one I planned.  The killings of first graders demanded it.  I began with an illustration from a children’s book, Alexander and the Terrible, Horrible, No Good, Very Bad Day.  Alexander drops his sweater in the sink.  He doesn’t get the prize in the cereal box.  His brother gets the seat by the window.  His lunch is missing a dessert.  That’s the kind of day a child should call horrible, I preached.  Our children are just a gunshot away from a very different sort of very bad day now.  Few days have passed since then that I have not been actively engaged somehow to end gun violence as we know it now.

Ferguson feels different, and what I”m feeling is taking me many layers more deeply into my activism.  I’m not equipped to write about it.  Others can do that far better and with more integrity than I.  Just this morning and as just one example, columnist Charles Blow said it well in the NY Times.  Read it. Comment on this blog and lead me to more that is helping you to make your way through this.

At the dedication of Amistad Chapel nearly 15 years ago, someone prayed that the portrait of Amistad leader Sengbe Pieh would gaze upon us, disturbing comfortable accommodations, inspiring courageous action.

I pray the same and promise to be open to where next God will lead me.

Hello.  I'm Rev. Kristine Eggert, retired after serving as Senior Pastor of Disciples Christian Church in Cleveland Heights, Ohio. I'm the Co-Founder and Executive Director of God Before Guns, a multi faith coalition of individuals and faith communities working to end gun violence.  In retirement, I believe God is calling me to work as a progressive Christian activist in social justice causes.
View all posts by Pastor Kris →
This entry was posted in Activism, Christian, Ending Gun Violence, Ferguson, God Before Guns, Uncategorized. Bookmark the permalink.