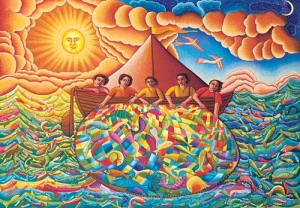 It was yesterday’s sermon title.  I used it to describe how we settle back in — more or less — to the routine of our faith once Easter has come and gone.  The so-whats and the ho-hums descend upon us pretty quickly.   We contrast that with the early disciples as described in Acts 2:42-47 who were doing quite the opposite — realizing that by saying Christ is Risen everything was remixed and reordered and new.  All who believed were together and had all things in common … and day by day the Lord added to their number those who were being saved.

We have a long way to go to be that together as a community of faith.  But I will say that yesterday was anything but ho-hum.  It began with one of our newest participants walking forward at 9:00 worship to place his membership at Disciples, recommiting himself to a previous confession of faith.  It continued during our time of prayer when visitors and long-time members alike felt comfortable enough to share aloud their concerns, their joys, confident in the power of community prayer.

The theme for the rest of the morning and afternoon was compassion.  Disciples is launching another effort for putting together hygiene kits for Church World Service — see details at www.discipleschristian.org — for the many tornado and flood victims in the southern U.S.  It’s a simple and inexpensive way to be hands-on compassionate.  We hosted a piano-duo concert, with pianists Shiho Saito and Josh Vogel, that was a benefit for relief efforts in Japan through Week of Compassion.  Shiho and Josh had just arrived in Japan for a concert tour when the earthquake hit and spent some days in temporary shelters so the cause is especially near and dear to their hearts.

We can be pleased about what we’re doing at Disciples Christian with yesterday as an example, but it’s got to be about more than one day.  Being a disciple is not a one-time experience.  It’s not about symbolic gestures.  As theologian Walter Brueggemann writes, Jesus is “in the generosity business and that means being constantly alert to any mismatch between the generosity of God and the needs of the people. If you share your bread with the neighbor, the world will be made new.  Generosity isn’t something you just think about, it’s something you do.”

Christ is Risen!  Live it every day.